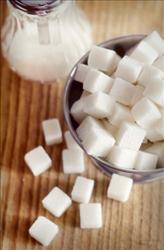 We’ve all been told sugar rots the teeth—but the brain as well? A new study has linked blood sugar levels even at the high end of normal to shrinkage of parts of the brain involved in memory and emotions, reports ABC. The “robust” link between blood sugar and brain shrinkage suggests that the definition of a normal blood sugar level might need to be changed, and that controlling blood sugar levels could help boost the brains of even non-diabetics, say the researchers. The study involved hundreds of Australians in their early 60s, and the link remained even when factors such as drinking, smoking, and obesity were taken into account.

The lead researcher says that while the study has no explanation for how high blood sugar can shrink the brain, the stress, poor diet, and lack of exercise associated with high blood sugar is likely responsible for poor brain health. More research needs to be done before any recommendations can be made based on the study, says a neurologist not involved in the research. “To speak as a clinician and tell patients that they better cut out all candy because it will shrink their brain is a leap of faith,” he tells WebMD, but there’s a simple way to have a healthy brain. “It’s just what all of our mothers told us: Eat well and exercise,” he says. “That’s a principle we would all do well to live by.”