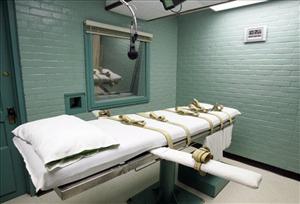 A microphone hangs over the gurney in an execution room. (AP Photo/Pat Sullivan)

Convicted Ohio killer Ronald Post wants a delay of execution because, he says, his scar tissue and 480 pounds of body mass would make lethal injection far too painful, the AP reports. “There is a substantial risk that any attempt to execute him will result in serious physical and psychological pain to him, as well as an execution involving a torturous and lingering death,” his lawyers said in a court filing. His lawyers even added that the 53-year-old is too big for an execution gurney.

No word from authorities yet, but 275-pound Ohio inmate Richard Wade Cooey made a similar argument in 2008 and was executed without comment. The year before, executioners spent two hours pushing IVs into 265-pound convict Christopher Newton, and later admitted his weight had an effect. In a 1994 case—this one in Washington state—400-pound inmate Mitchell Rupe argued that hanging him would be inhumane because of risk of decapitation; he was eventually sentenced to life in prison and died there in 2006.