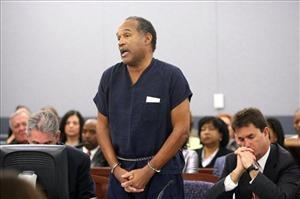 OJ Simpson’s robbery-and-kidnapping case isn’t quite over after all, Radar reports. Now serving 9 to 33 years in a Nevada prison, the ex-football star has himself a new lawyer who persuaded a judge to reopen the case. Their argument: Simpson’s former lawyer, Yale Galanter, was paid over $525,000 for defending Simpson in the 2008 trial but spent just $5,000 on a local attorney to represent Simpson in court.

“Galanter was motivated by his own interests, which caused him to materially limit Simpson’s legal representation,” according to the appeal. Palm also claims that Galanter told Simpson not to take the stand, said nothing when prosecutors offered him a deal, and knew in advance of Simpson’s plan to rob sports memorabilia from dealers. Who knows, Simpson might even might testify for the first time in the new hearing.

CaseClosed2: I agree, the case should be reopened. For OJ to be serving 9 to 33 years for getting back his own property is ridiculous. It appears he is being convicted in this case for being found innocent of killing his wife and her friend which he was found innocent of by a jury in court of law.SMH