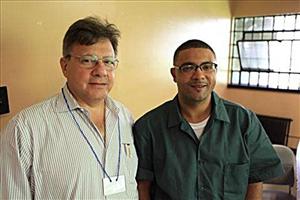 Finally, Eric Glisson and Cathy Watkins are truly free. Convicted of the 1995 murder of a taxi driver, Glisson and Watkins spent more than 17 years in jail. They were released last month while the district attorney looked into their claims of innocence (two gang members ultimately confessed to the crime), but the judge had required them to wear monitoring bracelets … until yesterday. After just 10 minutes, their convictions were vacated, reports NY1. “I describe this as I’m free from the prison plantation. That’s how I describe this,” Watkins said.

ABC News reports that the conviction was originally achieved in part by testimony from a single, questionable eyewitness, since deceased. “As long as you’re relying on a crackhead who gets paid, these wrongful convictions are never going to stop,” said a defense attorney. Three other man who were also convicted of the murder also had their convictions overturned yesterday, but they remain in prison in connection with another murder, reports the New York Post. That case is up for review on Jan. 2. As for Glisson, he says he is not bitter about his lost years, and is now a full-time student at Mercy College. “I’m looking forward. I’m not looking back.”