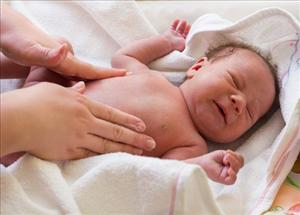 More than 13,000 babies were born in 2009 addicted to prescription drugs like painkillers. (Shutterstock)

Newborns Addicted to Pain Pills Up 300%

Heartbreaking medical news: Cases of babies born addicted to pain pills are up more than 300% over the past decade, forcing doctors and nurses to invent treatments on the fly, the Wall Street Journal reports. Crying non-stop, vomiting, jerking their limbs, these newborns are the result of America’s addiction to drugs called opioids—including anti-addiction drugs like methadone and painkillers like oxycodone. More than 13,000 such babies were diagnosed in the US in 2009.

Ill-prepared hospitals have created different treatments, with one giving babies methodone and another trying morphine. But then newborns have to be weaned off of those drugs. Worse, care for drug-addicted babies can take weeks and fatten hospital bills; one study found a mean cost of $53,400, with Medicaid covering 78% of the cases. And hospital staffs worry about babies they fail to diagnose: “Some are going home and withdrawing,” said one doctor who noted that drug-addicted mothers may not be ready for such difficult, sensitive babies.