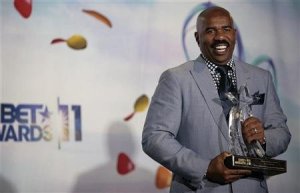 Under the new agreement, Harvey and Clear Channel will work on a number of joint ventures, including the international expansion of his radio show – which currently reaches about 6 million listeners weekly on 70 radio stations in the U.S. via its syndication on Premiere Networks – as well as the development and creation of new programming and promotions.

Harvey will also team with Clear Channel on community, charitable and multimedia events, and serve as a spokesman for the company.

Calling Harvey “an unrivaled talent,” Clear Channel chairman and CEO John Hogan added, “As the leading media company in America, we continue to deliver the most relevant content and top personalities to diverse audiences across the country and Steve is a remarkable talent and incredible asset for Clear Channel Media and Entertainment.”

Harvey himself was more whimsical in discussing the new deal.

“It is my pleasure to be in business with the best!” Harvey exclaimed in a statement. “My life has been an amazing ride, and when you can do business in a big way, it makes the ride all the more amazing. Clear Channel Media and Entertainment and Premiere Networks have been great partners. Mama, here come that Man!”

In addition to his radio show – which Harvey created in 2000 and was added to Premiere’s national lineup in 2005 – Harvey continues to host the syndicated game show “Family Feud,” and launched his syndicated daytime talk show “Steve Harvey” in September. The show was picked up for a second season in January.