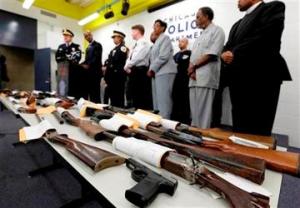 CHICAGO (AP) – A bloody weekend in which seven people were killed and six wounded has put an abrupt end – at least for now – to hopes that Chicago was at least putting a lid on its frightening homicide rate.

With a few days left in the month, the nation’s third-largest city now finds itself on the cusp of its deadliest January in more than a decade. The news comes just after Police Superintendent Garry McCarthy had announced that after several violent months, Chicago had seen a drop in homicides at the end of 2012 and for the first few weeks of 2013.

Police say the homicide rate is a reflection of the city’s gang problem and a proliferation of guns. Chicago has for years tried to cut off the flow of guns. It has what city officials have called the strictest handgun ordinance in the U.S. But police officials say more needs to be done and that penalties for violating gun laws should be stiffer.

Among those killed over the weekend was 34-year-old Ronnie Chambers, who was shot in the head with what police believe was an assault weapon. Such guns are banned in Chicago but can be purchased legally in the suburbs or nearby states. Chambers is the fourth child of Shirley Chambers to fall victim to gun violence.

“I’d pray for God to protect Ronnie and keep him safe day and night,” Shirley Chambers told the Chicago Sun-Times.

With the weekend shootings, Chicago now has 40 homicides – the exact same number as last January. With a few days left in the year, the city could reach its deadliest January since 2002, when it had 45 homicides in the first month.

Chicago’s homicide count eclipsed 500 last year for the first time since 2008, but last week, McCarthy announced recent figures showing homicides had dropped. The city saw a 16 percent decline in the fourth quarter of 2012 and a 22 percent drop in the first weeks of January.

McCarthy wants lawmakers to increase jail time for those who are caught with illegal weapons, including for felons who aren’t allowed to have them and for so-called straw purchases, in which people buy guns for others who aren’t supposed to have them.

Chicago’s handgun ordinance bans gun shops in the city and prohibits gun owners from stepping outside their homes with a handgun. The city passed the restrictions in July 2010 after the U.S. Supreme Court struck down an outright ban that Chicago had for 28 years.

Chicago leads the nation in guns seized by police, and recently police have started displaying the guns each week to offer a visual reminder of the awesome firepower that is on the city’s streets as they push for tougher gun laws. First Deputy Superintendent Al Wysinger said Monday that last year’s total of 7,400 is nine times as high as the number seized in the nation’s largest city, New York, and three times as high as in its second-largest, Los Angeles.

Wysinger called the spate of shootings “frustrating” for the department. But he said the number does not mean there are problems with changes the department has made to combat crime, particularly a strategy to focus on gang members and gang activity.

“Without this gang violence reduction strategy this weekend could have been a lot worse than it was,” he told reporters.

“We are doing the same exact things New York is doing,” said McCarthy, a former high ranking member of that city’s police department. “What is different is the reasonability of the New York gun laws.”