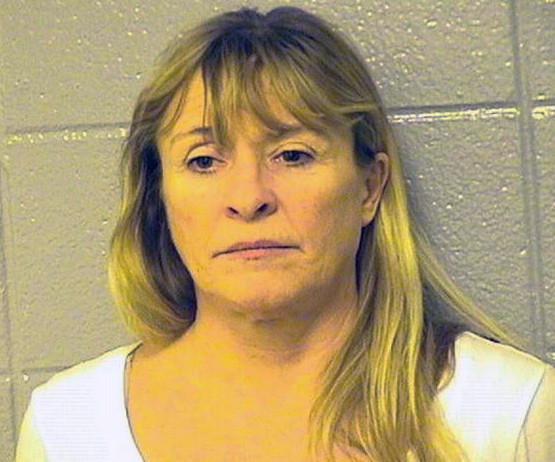 Elaine Cook, accused of biting off part of her boyfriend’s tongue during an argument on Valentine’s Day. (Cook County Sheriff’s Dept. / February 17, 2013)

After an argument on a Valentine’s Day date, a Chicago man tried to kiss and make up with his girlfriend.

But the girlfriend bit off a chunk of his tongue, prosecutors said.

Cook and her boyfriend, who had been dating for 10 months, went out for Valentine’s Day last week, according to prosecutors and court records.

Shortly after returning to Cook’s north suburban apartment, the two started arguing and she asked her boyfriend to leave, Assistant State’s Attorney Eve Reilly said. The man, 47, put on his shoes and started to head out the door when he tried to make amends, Reilly added.

“He told her they should stop fighting and went to kiss her,” Reilly said, “and she bit off a large portion of his tongue.”

The man ran to the kitchen sink. Cook followed, placed the detached tongue in her hand and threw it on the counter. He put the severed tongue in a bag of ice and called 911, prosecutors said.

Paramedics took the boyfriend by ambulance to nearby Evanston Hospital, but doctors could not reattach the tongue due to “inadequate blood supply,” Reilly said.

When reached by phone, the man said he has been visiting the doctor every day, has several sutures in his mouth and has trouble sleeping at night. Most of the right side of his tongue is missing, he added.

“It makes me sick to my stomach that she’s sitting in jail right now, but it’s just out of my hands,” said the man, who asked not to be identified. “I have to focus on getting better now.”