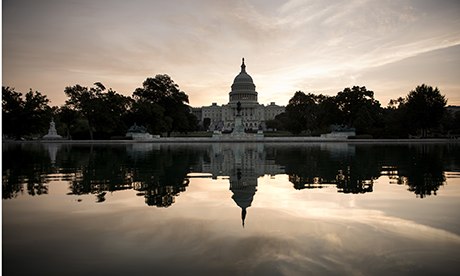 If the US goes on like this, then one day – one year, one decade – the copper bottom of investors’ confidence will fall out.

Americans need to discover how the world sees them

There’s little awareness of how the budget crisis has eroded US credibility. It’s time for a reverse Christopher Columbus

On Monday, government offices were closed in Washington DC, to mark Columbus Day. Except that most of them had been closed anyway, because of the US government shutdown. As everyone knows, Christopher Columbus was an Italian navigator who, in the service of the Spanish crown, supposedly “discovered” America and reported its potential to a wondering world. I have spent the summer in the United States watching, with growing alarm, a country engaged in a degree of self-harming which, if observed in a teenager, would lead any friend to cry “call the doctor at once”. As I set course back to Europe, my conclusion is this: America should do a reverse Columbus. The world no longer needs to discover America; but America urgently needs to discover the world’s view of America.

Ordinary Americans, and especially the small minority active in Democrat and Republican primaries, must learn more of what people across the globe are thinking and saying about the US. For if you follow that, you realise that the erosion of American power is happening faster than most of us predicted – while the politicians in Washington behave like rutting stags with locked antlers.

The 24/7 US news coverage follows every last lunge and twist of the stagfight. It is the political equivalent of ESPN, the non-stop sports network. Just occasionally, the rest of the world breaks through: for instance, when the World Bank and the IMF hold their annual meetings – right there in Washington – and the heads of both institutions, Jim Yong Kim and Christine Lagarde, warn of dire consequences. That gets a few column inches. Or when the government shutdown and debt-ceiling brinkmanship leads Barack Obama to cancel a major trip to Asia, including the Apec summit in Bali, leaving the floor wide open for president Xi Jinping to assert China’s regional leadership (“the Asia-Pacific cannot prosper without China”).

A more direct taste of foreign news is available just a few clicks away. On my cable TV control, if I scroll down to channel number 73, or 355, or whatever it is, I can get Al-Jazeera, China’s CCTV and Russia’s RT. Their reporters often speak perfect American-accented journalese, and sometimes actually are career American journalists, lured away from job-shedding US news organisations to give credibility to these channels. CCTV’s Washington bureau chief, for instance, is Jim Spellman, formerly of CNN. These channels’ take on the Washington dégringolade is much harder edged than the ESPN version. The website of the Russian state-backed RT quotes an editorial published by the Chinese state news agency, Xinhua, proposing that, in the light of this crisis, “several cornerstones should be laid to underpin a de-Americanised world”.

Of course these channels are representative of their undemocratic states, not their peoples. And you may ask, well, who on earth watches CCTV or RT? Does anyone take them seriously? In Europe and North America the answers are still “not many” and “not very”. (That is somewhat less true of Al-Jazeera.) But in Africa, Latin America and parts of Asia, it’s already a different story. In the global competition of international broadcasting, these well-funded networks are gaining influence.

It’s not just in the arena of soft power that perceptions are also realities. As George Soros keeps pointing out, that’s true of financial markets. Just as a reminder: the US hit its debt limit of $16.699 trillion in May this year. (For comparison: the World Bank estimates its 2012 GDP at $15.685tn.) Since May, the federal government has been using so-called extraordinary measures to pay its bills and refinance its debt.

These measures are what treasury secretary Jack Lew said would reach the end of their tether on October 17. A few days ago he told the Senate treasury committee that rates on short-term treasury bonds had almost tripled in a single seven-day period. And last week Fidelity, the largest American money market mutual fund manager, sold all its short-dated US government bonds. Just a temporary precaution, you understand. But if the US goes on like this, then one day – one year, one decade – the copper bottom of investors’ confidence will fall out.

Even the hardest form of hard power, military action, involves a significant element of perception. Vietnam has just said farewell to its war hero, General Vo Nguyen Giap, credited with driving both France and the US out of his country. As obituaries pointed out, his Tet offensive of 1968 was a military failure, since the Viet Cong were thrown back with huge losses. But politically, it played a key role in turning American public opinion against the war. Similarly, there is no purely objective truth about the wars in Afghanistan and Iraq, but in the view of a large part of the world, the US military did not exactly win.

At the time of writing, it looks as if the rutting stags in the Senate and House of Representatives will step back from the canyon’s edge at the last minute. But even if they do, huge damage has already been done. Politically, in the eyes of the world, the “full faith and credit” of the US has been further eroded.

Americans need to see those views from outside. Some understand this need: that’s one reason so many visit the US version of the Guardian’s website. It’s also a service the digital International New York Times (formerly International Herald Tribune) may help provide, with a wider range of international voices – although its target audience is modestly described by the responsible assistant managing editor, in a New York Times piece about itself, as “the political, business and cultural elite of the world”. But what about those proudly less cosmopolitan, non-elite Americans back home, including the active minorities who pre-select Democrat and Republican representatives in Washington, in partisan primaries for gerrymandered constituencies?

So here’s my au revoir suggestion. Let some public-spirited American billionaire set up a mainstream TV and internet channel dedicated to conveying to a wider American audience, in a vivid and accessible way, how the US is seen around the world. In Britain, people still occasionally use an old-fashioned slang phrase to express incredulity at something that is at once amazing and a bit ludicrous too – such as what’s been happening in Washington. They say: “Christopher Columbus!” Complete with Yahoo!-style exclamation mark, that might be a good name for the channel.

• This piece was amended on 16 October. The article originally stated that the US had exceeded its debt limit of $16.699 trillion in May this year, when in fact it hit its debt limit. This has now been corrected.