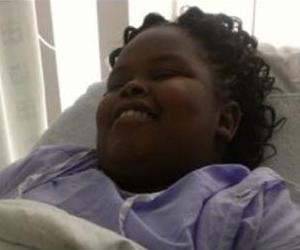 Jahi McMath went into the hospital to have her tonsils removed. (JVMHLN)

The lawyer for the family of a girl declared brain-dead after a routine tonsil surgery is heading to court today in an attempt to keep Jahi McMath on life-support. The Oakland Children’s Hospital has been pressuring family members to take the 13-year-old off her ventilator—and “quickly”—per the family, the San Jose Mercury News reports. “I told them, ‘You better not take my child off that machine. You do not have my permission,'” Jahi’s mother said, telling NBC News, “I don’t want to have my Christmas every year remind me of her being taken off a ventilator.” Officials reportedly denied her requests to wait until after Christmas and to have an outside expert examine her daughter, the Mercury News reports.

“They keep saying she is ‘dead, dead, dead’ and I am hoping the courts will say ‘no, no, no,'” the family’s attorney said, noting their anger is directed only at top hospital officials, not those caring for Jahi. “We just saw her; she is a beautiful young lady. She responds to her mother’s touch. She is warm.” The hospital responded yesterday, but without much to say due to privacy laws. A rep did, however, implore the family to grant the hospital legal permission to publicly discuss the case to “bring clarity, and we believe, some measure of closure and deeper understanding of this medical case.”